So who is the cutest Yorkie you’ve ever seen, besides your own of course?

Well that’s easy; have you watched Zola, sporting her casual weekend t-shirt and wagging her tail furiously in response to a Dog food commercial on TV? Dare I sound like a teen but “OMG! Like how cute is she?!”

Watch the video below:

‘CullenFamilyFun’ posted a video of their ‘to-die-for gorgeous’ Yorkie, Zola, barking and jumping about in response to a Dog Food commercial.

The ad features what I believe may be a Nova Scotia Duck Tolling Retriever, basically a dog much bigger than Zola, and even larger than real life on the big screen TV. It seems that Zola reacts to this specific advert as her owners have recorded it for her.

Zola runs up and down in front of the TV when the Retriever is on, biting and tossing about her little plush toy, amidst excitable yaps and very joyous tail wagging. It really is just too adorable, and the fact that Zola is wearing her casual tee with a ‘Peace’ sign on the back just takes it off the charts on the cuteness level. I could watch her, watching TV, all day!

But it does make me wonder what Zola sees?

It is believed that dogs perceive images on television in a similar way to us. Dogs have dichromatic vision compared to humans who have trichromatic vision, to put that into a nutshell; dogs do not differentiate between as many colours as humans do, but they are not far behind, and they are more sensitive to low light conditions.

One of the biggest differences between human and canine sight when viewing a TV screen however, would be the ‘flicker factor’. Dogs, who have better motion perception than us, would see the images on screen as rapidly flickering images compared to us who would see the same images in a more fluid motion.

The modern screens of today, such as the screen Zola is watching, minimizes this and allows the dog to see a more fluid motion as well. This is due to a higher refresh rate and a higher resolution than earlier screens. Add in audio, which dogs of course don’t need to turn up as some of us seniors do, and Zola just may believe that she has a giant sized friend that pops up in her living room at random times to play ‘get the teddy’!

Ever wish you could just reach into a TV and grab what is on screen? I wonder if Zola is wondering that about the Retriever as I am wondering this about her! 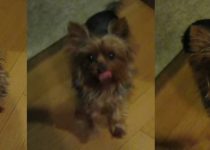 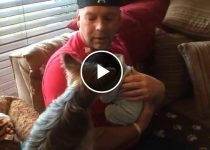 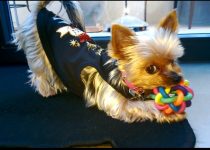