Jack is a Yorkshire Terrier who found himself in a very troubling situation.

He had been sent to the National Mill Dog Rescue after an accident occurred at the breeding facility he was from.

A Husky had mistakenly stepped on his back and as a result he became paralyzed in his hind legs.

Not only that, but Jack was suffering from malnutrition. His weight was only a tiny 2.2 pounds and for a fully grown Yorkie male this is too light.

National Mill Dog Rescue made a video about Jack the Yorkie to demonstrate the situation and how Jack miraculously holds on throughout his unfortunate circumstances.

Jack was very fortunate to have been received by a Rescue that was able to give Jack the Tender Love and Care he so desperately required!

One Rescue staff member even decided to give Jack a forever home, which is unsurprising as Jack is so sweet, as well as strong.

After a while Jack appreciated the care he was receiving and even began to walk around! Albeit with some trouble.

Usually in situations like this where you have a dog with so many problems, it is understandable that good food and belly rubs are not enough to ensure a good life going forward.

Specialized care is what is needed in the form of physiotherapy and even possible chiropractic treatment.

Of course these treatments can be very expensive which is incredibly sad. Many Yorkie and other small dog owners have been left with the horrendous decision to instead put their dog down rather than sell their house to pay for the vet bills.

Fortunately for Jack however, he received an abundance of love as well as required treatments and eventually he received a wheelchair that could assist him with his walking and even running.

You can see for yourself in the video below: 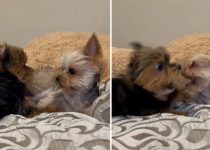 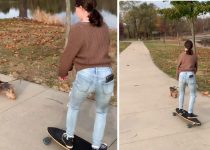 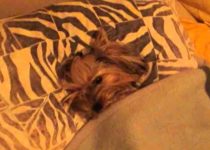