Ben Campbell woke up one morning and decided that day he’d buy something that could cheer him up.

A set of fake teeth.

It was during the peak of the pandemic and he hadn’t had much fun in recent days so a set of fake teeth would be the perfect solution.

Ben realized his new toy was missing and the first thing he noticed was his Yorkie, Thomas.

Thomas had stolen the fake teeth and it was now Thomas’s favorite toy.

It was at that point when Ben grabbed his camera and began filming.

Watch what he filmed below:

SHARE this hilarious video, it could make someone’s day! ❤️

Yorkshire Terriers are so awesome, the way they can make us laugh and happy by simply being their quirky selves.

It is truly a well-known fact that Yorkies are hilarious.

It is no secret as to why they are becoming the world’s most popular dog.

They are so small yet so large in personality. They know exactly how to interact with us as humans and this is why I say they are the most intelligent of dogs.

Even more intelligent than Border Collies.

Of course if you ask someone who loves Border Collies, they’d probably disagree.

But not me, I am totally unbiased.

If you loved that video, click the link below to view another hilarious video. 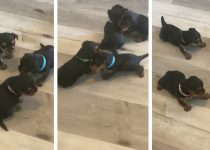 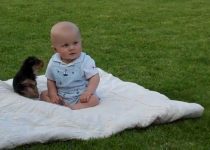